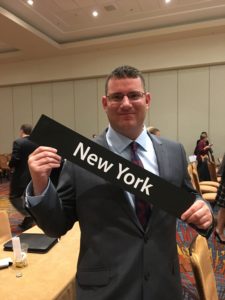 A Student’s Perspective of the AARC House of Delegates Meeting
Indianapolis, Indiana

On October 2nd and 3rd I attended the AARC’s fall/winter House of Delegates meeting as a student representative from New York in Indianapolis IN. I am currently a senior in SUNY Stony Brook’s Respiratory Care Program. Attending the meeting provided a unique opportunity to witness first-hand the inner workings and current state of the respiratory care field. From the beginning of the meet and greet held on October 1st, until the end of the HOD meeting, I was greeted with open arms and enthusiasm by delegates from across the country.

The meeting kicked off with the presentation of the flag by the Indiana National Guard Reserve, the singing of the National Anthem by a delegate, and the Pledge of Allegiance. After the pledge, the delegate from Connecticut presented all of the veterans in attendance with an American flag and a letter of appreciation. This was a wonderful way to start the meeting and recognize veterans that are a part of the respiratory care community. The next thing on the agenda was to go over house rules and procedures in regards to voting on resolutions and a review of the agenda for the next two days.

The first order of business was an emergency vote on a resolution for the AARC to provide emergency disaster relief funds to all members in Puerto Rico, of whom were affected by Hurricane Maria. This vote was for a one-time disbursement of funds in the amount of $500 to all members without application. The resolution was passed with a unanimous yes from all delegates in attendance. The disaster relief fund is an AARC fund that provides emergency funds to members in a declared disaster area. It is funded by donations and the HOD members and their respective state societies donated over $21,000 this year alone. This was the first time I had heard of the fund and was inspired to see how the AARC cares and provides for its members. It was an emotional moment for many in attendance for the two delegates from Puerto Rico were working diligently on their island providing care for all the victims of the disaster and were not in attendance for the meeting.

The president of the AARC, Mr. Brian Walsh, addressed the HOD next. He addressed issues such as membership numbers and progression of the scope of practice. The AARC currently has just under 40,000 members worldwide. According to the Bureau of Labor and Statistics, there were 120,700 respiratory jobs in the US in 2014 giving the AARC a 33% membership rate. The AARC is the only professional organization for the respiratory care field and membership is not up to par in my eyes. I feel it is important for people working in the field to pay their dues and become members of the AARC. It shows a willingness to stay current and advocate for the field while being provided with up-to-date literature and employment opportunities.

Mr. Brian Walsh spoke about a research project where he surveyed physicians to see if there would be a need for an advanced practice respiratory provider. Overwhelmingly they agreed that there is room in the medical field for an advanced practice provider to alleviate some of the burden on physicians. This opens the door for a master’s program that respiratory therapists could obtain and transfer into. This could provide a pathway for upward movement and expand the scope of practice for RT’s. Currently, many therapists transfer to nursing or a physician’s assistant program to fulfill a desire for more responsibility and autonomy in regards to patient care. An advanced practice in respiratory care will furnish a conduit that not only advances individual careers but strengthen the field as a whole.

The second day of the HOD meeting saw two resolutions presented to the house to be voted on. The first was addressing the membership fee for students. The resolution asked for the fee to be waved for current students. Delegates from numerous states expressed their different opinions on the matter. The resolution was not passed and a reduced fee will remain for students to become members of the AARC. Personally, I have mixed feelings about a free membership for students. While I know the financial hardships that come with attending a university, the AARC would benefit more from a reduced fee. I believe if a student pays for the membership they will be more inclined to read the newsletters and continue membership after graduation.

The second resolution presented was to make it mandatory for RT’s to obtain a baccalaureate degree in respiratory care within 7 years of licensing. Again, delegates weighed the pros and cons. This resolution also did not pass which came as a surprise to me. During the meeting and having conversations with many delegates, everyone agreed that the scope of practice needs to be expanded. I feel that making it mandatory for a four-year degree further legitimizes the field. Many other health sciences programs have made specific changes to their education requirements and it solidified their place in the medical field. Not only would it foster bona fide growth, it could justify comparable compensation to nursing.

Attending the HOD was an experience I will not soon forget. Seeing the vision of some of the shakers and movers in the field gave insight on what the future holds. Advocating for the advancing scope of practice is a part of the AARC that I see myself working towards in the near future. This meeting showed the importance of being a member of not only the AARC, but being active in your state society. If I could give any advice to students it would be to read the newsletter and participate on the AARC student forum. Any student that has the opportunity to attend the HOD meeting should jump at the chance.